Vitiligo is a dermatological disorder in which white patches form on the skin as the result of inactivation of cells (called melanocytes) which produce melanin.

This disorder affects about 1% of the world’s population, with no significant difference in gender or race. In 50% of cases it appears before the age of 20, often after significant psychological/emotional events, burns or skin abrasions.

The white patches are well circumscribed and usually have a hyperpigmented border, although sometimes the border can be hypopigmented (trichrome vitiligo). The patches usually appear on the hands, face and genitals, although there is no rule about this. In some cases vitiligo is associated with thyroid disorders (hyperthyroidism or hypothyroidism), pernicious anaemia, Addison’s disease, juvenile onset diabetes and other autoimmune diseases. Furthermore, it has been noted that 30% of people with vitiligo report that they have relatives who are also affected by vitiligo, which indicates a genetic connection.

The main problem with vitiligo is that because it often develops on exposed areas (face, neck, hands) it can cause psycho-emotional reactions in the affected person. Sometimes these reactions can be so strong that they affect the person’s interactions with their family and society. For this reason the treatment must always be convincing, expert and empathic. Many treatments have been proposed as solutions to vitiligo, trying to produce  gradual re-pigmentation of the areas affected. 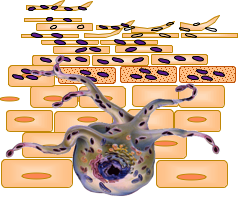 Vitiligo is a syndrome in which various different factors can lead independently or synergistically to the disappearance of melanocytes from the skin and other sites in genetically predisposed individuals.

Vitiligo can affect variably sized areas and different sites of the skin and may or may not be associated with other disorders such as iritis, thyroid diseases, diabetes mellitus, pernicious anaemia, autoimmune atrophic gastritis and alopecia areata.

Different treatment approaches are indicated depending on the symptoms given by the type of vitiligo, how much skin is involved, the phototype of the individual, the presence or absence of residual melanocytes in the depigmented areas, the presence or absence of other disorders and the degree of change in the affected person’s quality of life. Age and previous treatments used by the subject can also influence the choice of treatment. In any case, classifying and assessing the course of the vitiligo in the individual is the first step in establishing an appropriate therapeutic plan. For this reason the clinical classification of vitiligo is based on an analysis of the symptoms and, therefore, on two criteria: the extension of the disease and the site of the areas involved.

The typical lesion of vitiligo is an achromic, white, oval or roundish patch with a diameter from a few millimetres to several centimetres and clearly distinct, more or less regular borders. Rarely the external border may be hyperpigmented, erythematous or pruritic (inflammatory vitiligo). In some cases there may be an intermediate colour at the boundary between the affected skin and the healthy skin. This picture is called trichromic vitiligo since a third, intermediate colour is added to the classical two colours usually seen in vitiligo. Whatever therapeutic approach is chosen, it will have a faster effect in the trichromic forms of vitiligo.

The colour within the white patches on the skin is uniform. However, there may be variably sized pigmented spots, especially in the proximity of hair follicles emerging from the skin. The presence of this pigmentation is an indicator of a better prognosis, if all other clinical factors are the same.

Other symptoms may be associated with the skin patches: leucotrichia (white hairs), changes in choroidal pigmentation, alterations in the pigmented layer of the retina and uveitis.

Vitiligo can affect any area of the skin although some areas are preferentially affected, such as the neck, axillae, genitals (groin and penis, in particular), elbows, hands, knees and feet. According to one study, people with a dark phototype are more readily affected by vitiligo.

Generally speaking, it is more probable that the white patches of skin occur in areas exposed to the sun, such as the face and hands, in skin folds, such as the elbows, knees and groin, and in skin around orifices, such as the eyes, nostrils, umbilicus, and in the genital region.

Areas of the face respond more quickly than other areas to treatment and individuals with a dark phototype usually have better results.

When deciding which of the different therapeutic protocols to use, the main pictures of vitiligo to refer to are:

segmental vitiligo, with lesions restricted to a single part of the body, for example a leg, one half of the trunk or face, or to a dermatome. Segmental vitiligo accounts for 10% of all cases of vitiligo and differs from the other forms in many ways, including better response to the usual treatments, younger age at onset and less association with autoimmune diseases.